Wild Bird Shelly Magpie Walks Into The Cage On Request 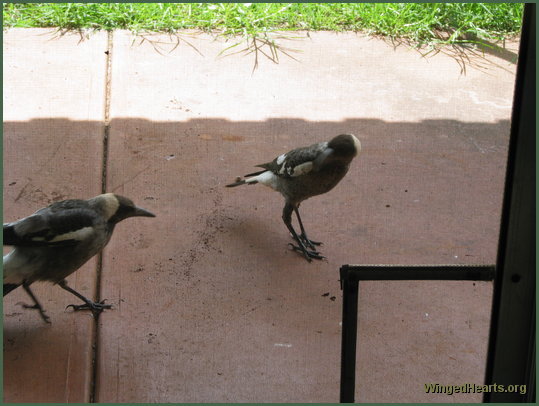 Juvi magpies - Shelly (left) with sister Nelly at our back door.

Will a wild bird (never handled or hand fed) walk into a cage just because you ask her to?

Juvi magpie Shelly injured herself on the day of the terrible storms resulting in the inland tsunami in Toowoomba and the Lockyer valley. She didn't come down with her family for two days. Due to the heavy rains we couldn't go out into the neighbouring paddocks looking for her either. We thought she may have met a tragic end in the storms, but when the rains stopped briefly on the third day Ron went scouting and found her sitting still in a paddock. Relieved to find her alive, Ron and I would go out to the fields to feed her when we could.  A few days later she started to walk but after 3 weeks she still could not fly.  She could only climb up tree trunks by hopping along along fallen branches that were still leaning against them as in the picture below.

From there she gradually got the strength to hop up to slightly higher branches from where she swoop down. But taking off from the ground and flying was still beyond her. We felt it was time to take her to the vet. So we took out the possum cage that Ron had adapted for the birds.  We spoke to her parents Vicky and Bertie magpies and asked them to trust us, and that we wanted to help her get better.  Even though she had never seen the cage before Shelly being no fool, inspected the cage from outside and followed the string, walking along it to the back door where Ron was standing and looked up at him with an intelligent eye. She seemed to be saying 'I know you will pull this as soon as I go in'.  Nelly knew it wasn't meant for her and had no hesitation in walking inside, checking it out and giving it the all clear. The crows, noisy-miners and butcherbirds  too were interested and much consultation went on between the species especially with the crows (who are the most worldly wise of them all). 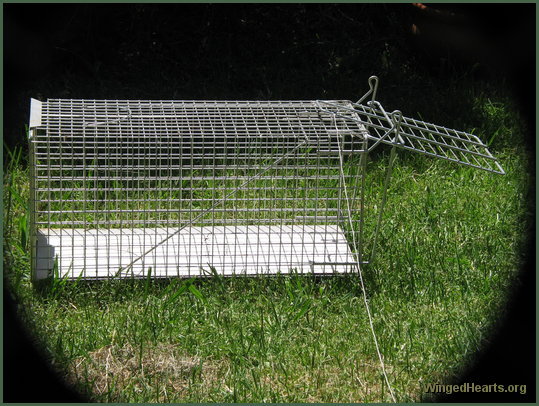 The next day we set the cage up early.  The whole family came down with Shelly.  Vicky knew all about the cage having seen it action several years ago with Butchie butcherbird and also with Maggie.  Vicky and Bertie left the girls behind with the cage.  Shelly was procrastinating - lingering at the lilypot and wandering around the yard.  But Nelly was running out of patience. In reality she was very anxious about her sister's less than satisfactory recovery to date. She lost no time in scolding Shelly, urging her to enter the cage. Thankfully Shelly obliged.  She stepped into the cage and waited while we made doubly certain that we had the right sister inside the cage before pulling the string to shut the door. When we brought the cage inside, Shelly got a bit nervous not knowing what we wanted her to do next.  She snuck out while we were putting in a bowl of water for her to drink. But the screen door was shut and she couldn't go outside. Ron caught her and put her back in the cage.  On the drive to the vet, she tried every which way to break out of the cage. 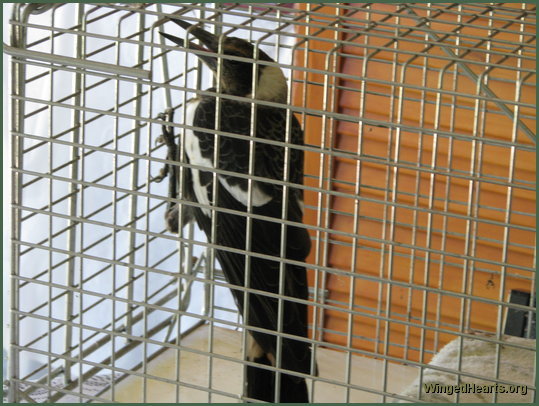 The vet checked her out and determined that were no broken bones or any obvious dislocation. As he stretched her wings and massaged them, we think she liked the feeling and she never complained, despite her nervousness. The staff at the clinic were amazed to hear that the bird had just obliged us by walking into the cage - especially since none of these birds have ever been touched or even hand fed.

Back in the car, she was calm and confident. While tired from her nervous ordeal, she had understood what the trip had been about. She knew she was loved and cared for and that we were all trying to help her fly again.  She made no attempts to escape and enjoyed her ride home.

On the way home we called the family from the road, but we couldn't see them in the trees. On hearing the car they had already flown over to our yard and were waiting for the news. As soon as the cage door opened Shelly ran out and flew high into the trees. The stretch and massage must have eased the stiffness in her wings and fixed any mild dislocation that could have been preventing her expanding her wing properly for full flight.  Delighted, we couldn't believe our eyes!  Vicky was so impressed at the quick and immediate results. Bertie was ecstatic.  But both parents are so mature, they stayed with us to show us their gratitude before finally going over to check out their daughter. 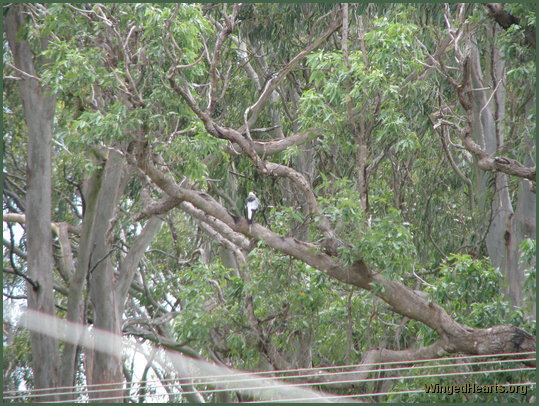 Not long after they all came back down. Shelly and Nelly sitting on the lilypot. Shelly pleased as punch to have overcome her fears. She had stepped into the unkown at the request of another creature, not knowing what to imagine. And now she had regained her flight.

A while later Vicky came down with her daughter - just the two of them to say thank you. The whole family was so pleased and excited. Over the next few days as Shelly's flying muscles got back into shape, they would call us out to show how more she could do each day.

The girls too fly around with gusto in a variety of formations and land with full aplomb beside us, keen to show us how happy they are to be able to wing around again. Magpie parents are well known for fiercely protecting their kids from humans (and other animals), so its really remarkable that they would trust us enough to listen and do as we requested.

Check out this video of them tumbling around like puppies in the backyard (taken yesterday):