Butcherbirds in the wild get conjunctivitis quite often. In most cases the disease does not heal, causing the bird to go blind with tragic consequences. Unable to see, the bird can't find enough food and starves to death or flies into object injuring itself only to fall prey to predators or eventually starvation.

We first noticed the problem in Eddy, one of  Butch and Cass's kids from their first clutch. The vets wanted us to catch the bird before they would help it. They wanted to be sure of their diagnosis and give it the correct medication. The laws also require them to euthanise a wild bird, if they are unable to help it. But to catch a wild bird especially at the time when the parents were sending it out was quite impossible. The bird would have died if left untreated in any case and any medication that could have just given it an outside chance would have been worth the risk. But we got no assistance from the vets.

A kind pet shop owner offered me some bird vitamins and a general purpose antibiotic. We made the solution daily, dipped bread into it and offered it to Eddy. His eye started improving within a few days. All his family understood that we were trying to help him and let him return home twice day to get his medication. Eddie was thankfully healed before he left permanently. (Eddy visited us once a few years later, so we know he was permanently cured.)

After that, most years, Butch or one of the kids would get it towards the end of winter. We gave them the same treatment and they recovered in a few days. Lack of sufficient variety in their natural food in the drought and harsh weather is a major contributing factor, according to the experts.

This winter (2008) Butchie got it again, but this time the anitibiotics would not work. We told her to trust us and let us help her. Soon she could barely see and had stopped coming to eat. We would call her with no response. We were worried. One evening, I got home to find all the birds collected to welcome me. I told them that I wanted them to bring Butchie. Within minutes she arrived. But she could not see the food to pick it up. But now she wanted our help. She stayed near us almost within reach. Ron arrived home and after a couple of attempts he managed to catch her. The first time Ron caught her she got away. She could have flown away, but she stayed and so Ron could catch her again. We converted a possum trap into a cage and took her to the vet.

The vet scraped the crust off her eyes and she could see again. For the next 10 days, we had to wash her eyes with a special antibiotics solution and also give her antibiotics in her drinking water.  We got her special insectivorous food which she loved and it made her days in confinement endurable. Butch never complained, though like all wild birds, once she regained her strength she was fed up at not being able to fly and stretch her wings. Dusk was hard, as she wanted to fly home and be with her family for the night. For a few times, each day we would take her cage outside so the others could see her and know that she was well and getting better. She too could speak to them.  At first her family thought that while she was safe with us, her illness was so extreme that she would die within days. As they saw her regain her strength and heard her sing again, their confidence increased as well.

Christine Agro who is a  well known Animal Healer and Communicator says that it is helpful to "have some golden seal tincture on hand. Golden Seal eye bath will bring immediate relief that lasts all day. It has an antiseptic and cleansing action for any infection, a drawing power to clean out any foreign particle and soothing resins to calm irritation. For more serious conditions, Golden Seal has a deep action in the eyeball and will get well into the structure and fluid of the eye with its soothing antiseptic action – to make an eye wash for the birds put a drop of golden seal in an eye cup of warm water and bathe the eyes morning and night. The thing about working with herbs is that you support the natural healing ability of the body."

Thankfully Butchie completely healed and we set her free on day 10. Butch and Cass sang around the yard, then made a round of all their boundaries loudly announcing her return to good health and the free world. The slideshows below show her progress.

(click on the 'next' button to forward through the slides).
Previous Slide 1/7 NextButch gets conjunctivitisThe right eye was much worse than the left 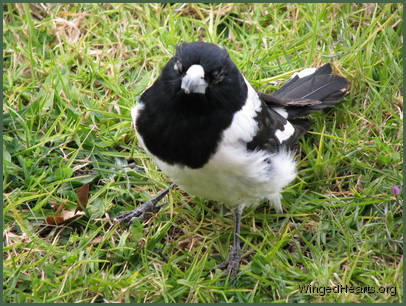 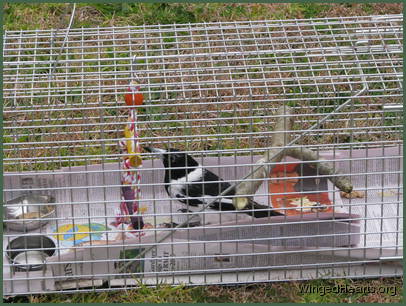 The frangipani branch made a good natural perch 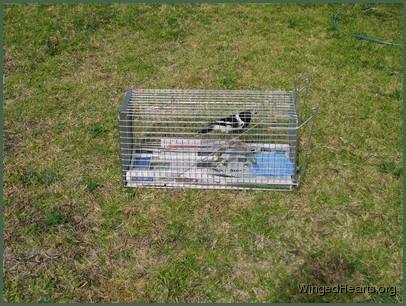 Butchie would hop on and off to get exercise 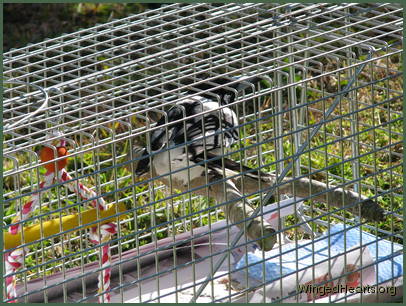 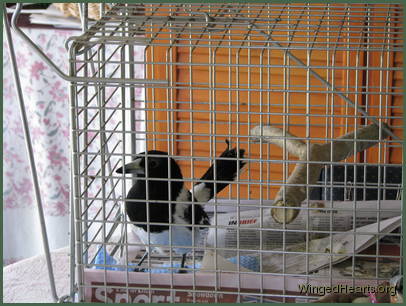 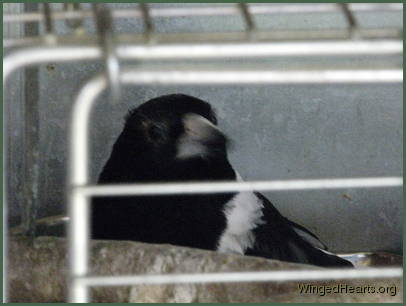 Back in the wild - a free and healthy bird again 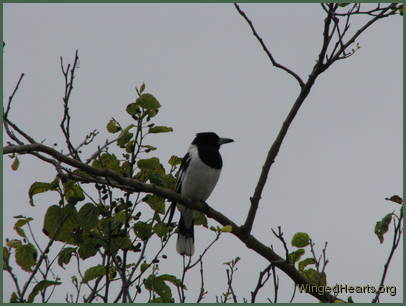 Ron kept our readers informed of her progress on the blogs (click on the links below for the details):

Butch Gets Out Of Hospital

Species:
Butcherbird
Pied Butcherbird
Stories about:
Birds and others
Bookmark/Search this post with